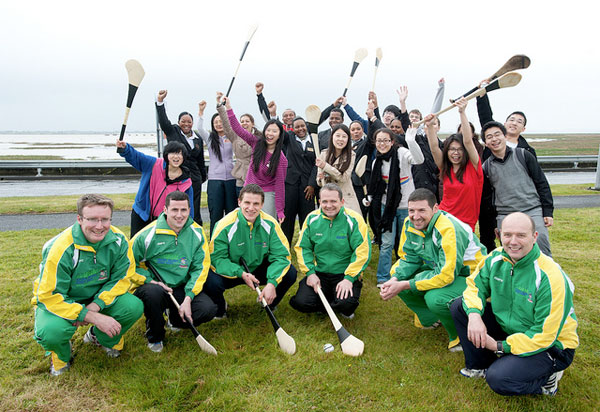 Want to get a real taste of Irish culture?
Well, here’s an opportunity to discover Ireland’s unique sporting pursuits of hurling and gaelic football for yourself.
For many visitors to Ireland, their exposure to our national sports of Hurling and Gaelic Football, or Gaelic Games as they are collectively known, is extremely limited. Unfortunately for most, this might only involve watching the games on television for a few minutes. For the uninitiated, Gaelic Games are the lifeblood of every community, are an intrinsic part of Irish culture and give counties a real sense of pride and identity.

Hurling and Gaelic Football are unique amateur team games that are equally compelling to watch as they are to play such is the passion and intensity involved. Hurling is a stick-based ball game that is considered the fastest and most skilful field game in the world (the ball can travel up to speeds of 150kph) while Gaelic Football is played without sticks and uses a bigger ball that is kicked for scores. Gaelic Games are arguably one of Ireland’s most treasured and unique cultural offerings yet remain under the radar of most visitors to our shores.

There are 800,000 members of Gaelic Games’ governing body, the GAA. It’s headquarters in Dublin, Croke Park, is currently Europe’s fourth largest stadium which stands as a reminder of how amateur games can compete and indeed thrive in the modern globalised world.

However, the boundaries to those elusive and enigmatic sports have now been removed by a new West of Ireland company, Go Gaelic, who aim to de-mystify the ancient games of Hurling and Gaelic Football and offer a unique insight into the games and their cultural significance.

For the uninitiated, Go Gaelic is a County Clare based company formed by two lifelong friends, Eoin Brennan and Eoin Vaughan that offer an active introductory course to Gaelic Games by means of both audio/visual and practical coaching aids. While for the more passive participant, there is also the opportunity to go to a live game.

Go Gaelic feel that a visit to Ireland is incomplete without some degree of exposure to our unique and immediately identifiable games. After all, there is no better introduction to a country than witnessing its people immersed in their passions. For example, for tourists to Argentina, a visit to Boca Juniors vs River Plate is a must to witness the passion of their fans. The same applies to Brazil and the Maracana Stadium. Yet it is rare to see foreigners at hurling games throughout Ireland. From extensive research, Go Gaelic believe that this is largely down to a lack of internal promotion and communication which is a great shame as Hurling and Gaelic Football are as unique to Ireland as Bull Fighting is to Spain or Mexico, or Sumo Wrestling is to the Japanese.

Recent visiting dignitaries from the Queen, and President Obama to vice president of China Xi Jin Ping were all visitors to Croke Park, with the latter pair also trying their hand at hurling.
You too can experience the same opportunity by either visiting Go Gaelic, or alternatively getting the Go Gaelic team to come to you via their mobile unit.

Don’t let your Irish adventure pass by without experiencing its most treasured secret. Discover Ireland’s unique sports for yourself.
Go native, Go Gaelic

No tweets were found.